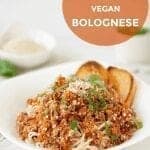 The Georgia heat is upon us full force, and I am always trying to find ways to cook a nutritious meal without heating up the kitchen. Serving salads are a staple during this time of year, but sometimes I want something heartier.

That's when I pull out my Instant Pot and create a quick meal that does not warm up the kitchen or require me to go outside and cook over a hot grill. So, I decided to make my own version of bolognese.

Bolognese is usually simmered slowly for several hours until the ingredients all marry together creating a thick sauce perfect served over pasta. However, using the Instant Pot creates this thick vegan version of sauce in only 20 minutes of cooking time.

Bolognese usually is a meat-based sauce, originating from Bologna, Italy. The sauce has just a bit of tomato for flavor, while the rest is meat, spices, and liquids which are generally wine and milk.

Bolognese is simmered slowly for several hours until the ingredients all marry together creating a thick sauce perfect served over pasta.

What Is Vegan Bolognese?

Vegan Bolognese is a play on the hearty meat sauce which exchanges it meaty texture with very finly chopped cauliflowwer, carrots, mushrooms and eggplant.

The base is still the traditional seasonings of tomatoes, garlic, oregano, basil, and rosemary. For the liquid milk is substituted with almond milk.

The sauce is lightly sweetened with maple syrup which brings out the flavor of the tomatoes and a little kick of heat is added with crushed red pepper flakes.

I found my recipe in The Ultimate Vegan Cookbook For The Instant Pot I tweaked it just a bit to spice it up for my hubby's liking.

For another great Italian sauce recipe be sure and try my Homemade Spaghetti Sauce With Fresh Tomatoes. The rich, delicious flavor of this homemade spaghetti sauce with fresh tomatoes is like stepping into a sweet Italian grandma’s kitchen, smelling the aroma of tomatoes and garlic roasting creating anticipation to the delicious bowl of spaghetti you soon will be eating. 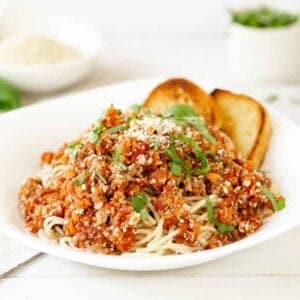 The basic recipe is taken from The Ultimate Vegan Cookbook For Your Instant Pot
Hungry For More?Join my members email list to get the latest recipes and party ideas. You will also have access to my members only printables library.