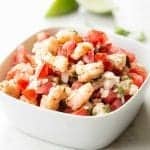 Shrimp Pico De Gallo is full of zesty lime flavor, sweet onion, cilantro and yummy spicy shrimp that packs a punch to all your Mexican dishes.

Today my daughter whipped up a batch of her Shrimp Pico De Gallo.  We were both hungry for shrimp and I had some tomatoes ripening in the window seal so she suggested a little Mexican for lunch! Yes, I love having someone cook for me, especially someone who is as good at it as she is.  She is a product of Food Network, choosing to watch it over Barney when she was only two.

Ok, so here is a funny thing about pico de gallo, the translation from English to Spanish literally means rooster's beak! So for the sake of not grossing out my guest when I serve it, I'll call it by its Spanish name.

My favorite part about pico de gallo's flavor is the base recipe consist of all fresh raw ingredients. The key to a full flavored recipe is to use fresh cilantro not dried.  Here's a tip, I find it easier to cut it with kitchen scissors instead of chopping with a knife. Also, I like to freeze any left over cilantro I have. I just wash it, pull off all the big stems then stuff it in a sandwich size ziplock bag.  When I need to use it in a recipe I just take scissors and cut off from the frozen leaves what I need. It's not as good as fresh but much better than dried. 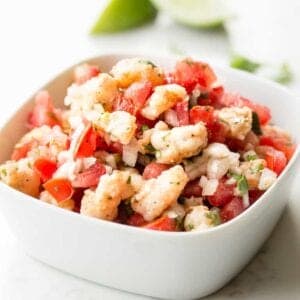 Hungry For More?Join my members email list to get the latest recipes and party ideas. You will also have access to my members only printables library.