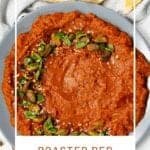 Roasted Red Pepper Spread is a delightfully sweet, Mediterranean flavored roasted red pepper and tomato spread that can be used as a dip for naan bread, a sauce for pizza and pasta, or a sandwich spread.

We have close friends that worked in Uzbekistan and have shared with us the delights of Uzbek recipes. One of my favorites is the tradition of canning winter salad (qish salat).  Our friends introduced us to this Roasted Red Pepper Spread when they served us a traditional Uzbek dinner.

The spread was served with naan. As we sat on the floor and ate, they explained to us the process of tearing off pieces of the traditional bread and dipping it in the spread.  To make your own homemade naan be sure and visit my post for a Whole Wheat Naan Recipe.

This spread was something I wanted on my pantry shelf year-round!  I set out for the farmers market purchasing sweet red peppers and ripe tomatoes to can up my own Roasted Red Pepper Spread.   I was delighted with the results and it has become a staple in my canning stockpile each summer.

Roasted red pepper sauce is easy to make. It only requires a few tools; a knife, cutting board, cookie sheet, and a blender.

What kind of pepper to use?

The best roasting peppers are red bell peppers, named for their bell-like shape. They have a mild, sweet flavor and crisp juicy flesh that holds up well to the heat of roasting.

How to cook the peppers

The skin is thick and does not break down when processed in the mixer. You would have little bits of pepper skin in your sauce. Also, a pepper's skin is more bitter than the flesh and will overpower your pepper sauce.

What is nutritional yeast?

This recipe calls for 4 tablespoons of nutritional yeast which is a popular food product often used in vegan cooking. Adding nutritional yeast gives recipes a cheesy flavor that is dairy-free. It gets its name from the protein, vitamins, minerals, and antioxidants it contains.

Studies suggest that nutritional yeast may help protect against oxidative damage, lower cholesterol, and boost immunity. Healthline has more information on why it's good to add to your diet.

How long does the sauce keep?

The red pepper sauce will stay fresh in an air-tight container in your refrigerator for up to a week.

Can you freeze red pepper dip?

Since this is a dairy-free sauce, so you can freeze it in an airtight container or freezer bag. Use within 6 months. Allow thawing in your refrigerator overnight.

How to make a big batch and can the sauce

A great way to enjoy roasted red pepper sauce all winter long is to can up a big batched when red pepper and tomatoes are at their peak.

If you are new to canning be sure and read my Canning Supplies Guide. There are many helpful tips and ideas. 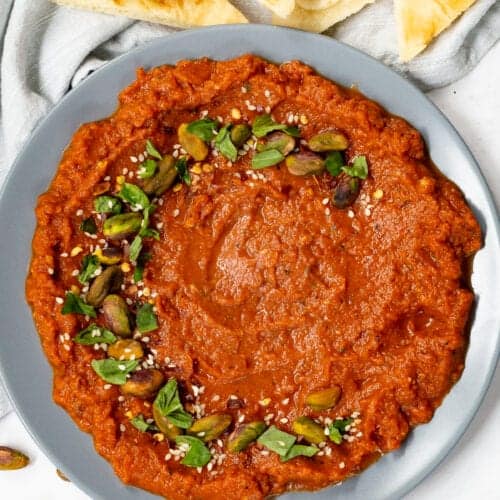