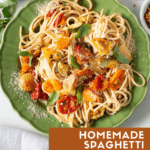 Spaghetti Sauce With Fresh Tomatoes is a simple vegan recipe that is full of delicious Italian flavors and a touch of spice. When you make this recipe your home will be filled with the aroma of roasted garlic, tomatoes, and herbs just like an Italian grandma's kitchen.

What to do with a lot of cherry tomatoes

I was trying to figure out what to do with the abundance of cherry tomatoes that are growing now when I came up with the idea to create this homemade spaghetti sauce with fresh roasted tomatoes.

Roasting cherry tomatoes is easy. I do have a tip, however, to get the roasted tomatoes to hold their flavor and shape. After cutting them in half, toss them in a colander and sprinkle salt on them. Let them rest there for 30 mins in your sink.  This will help draw the moisture out. After that pat, any excess moisture of with paper towel and then place the tomatoes in a dry bowl for the next step,  seasoning.

How to roast tomatoes

Fresh herbs are always best if you have them to make this homemade spaghetti sauce with fresh tomatoes.  If not most groceries sell the plants now in the produce section. They are cheaper than the little packs they sell and I can get several trimmings off of them if I keep them watered.

I have a Hydroponic Garden Tower that I have all my herbs for this recipe growing in. It has been easy to keep this going year-round, but I do have to pull it into our garage in the winter and use plant lights.

For this light pasta meal, I ramped up the nutrition and cut out the gluten by using Trader Joe’s Brown Rice & Quinoa Spaghetti Pasta.  Quinoa is an excellent alternative choice to wheat pasta and it does not get mushy when it’s cooked like gluten-free pasta tends to do. It is higher in protein than other gluten-free varieties, and it contains high amounts of fiber and iron. Another plus, it cooks quickly and does not clump together like other grain alternative pasta.

I also created something a little different for this recipe to go with this homemade spaghetti sauce. I wanted to a topping like cheese but I’m vegan. So I created an alternative that I like even better than parmesan cheese.  I mixed dried Italian bread crumbs equally with nutritional yeast, tossing to mix, and then sprinkled on top of my spaghetti.

If you enjoy vegan recipes with tomatoes be sure and try these. 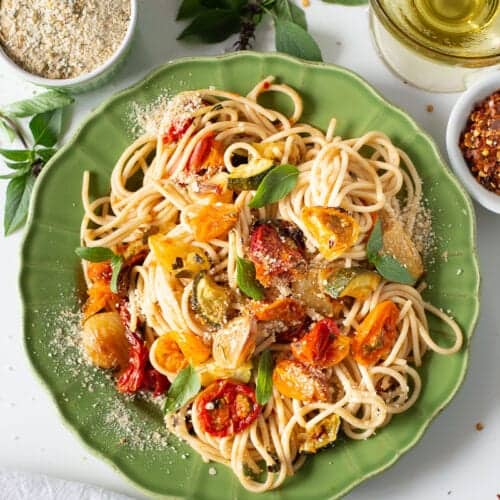 Gina Dickson
Spaghetti Sauce With Fresh Tomatoes is a simple vegan recipe that is full of delicious Italian flavors and a touch of spice. When you make this recipe your home will be filled with the aroma of roasted garlic, tomatoes, and herbs just like an Italian grandma's kitchen.

To save you ink, video and equipment images will not print.

Need an ingredient to make this recipe? Click this Instacart button and get what you need sent right to you.

Need an item in the this recipe? Click the Instacart button and have it sent right to you.

❤️ Welcome! Our tables are a gathering place where we can relax, show love, and encourage others while enjoying a meal together. I aim to help you make delicious easy recipes that inspire fun, fellowship, and belonging around your dinner table.  Read More…