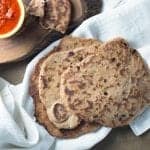 Enjoy this soft, chewy whole wheat naan recipe with your next meal or your favorite dip. This recipe is a healthy,  authentic old-world bread that can be stuffed with your favorite sandwich fillings. It also goes perfect with hummus and classic roasted red pepper spread.

What is whole wheat naan?

Traditionally, naan (pronounced nahn ) was leavened by airborne yeasts and baked in a tandoor oven. Slapped on the hot side of the oven, naan puffs, browns, and takes on a smoky flavor, all in about 60 seconds. In my more modern kitchen, I used a cast iron pan heated over high heat.

Why use whole wheat?

I freshly grind my wheat and do not use any white flour in the recipe.  Using 100% whole wheat packs the nutrition of all three components of the wheat kernel. The outer rough layer of the grain, the bran, is valuable for its fiber; the wheat germ of the seed is high in nutrients; and the majority of the grain, called the endosperm, is a good source of carbohydrates.

During the processing process, whole wheat flour has the most nutrients part of the wheat kernel left intact: the bran, the germ, and the endosperm. Essentially, these are the layers of the wheat berry, which hold all of the vitamins and minerals.

On the other hand, if you use plain white flour, only the endosperm is intact. This basically strips the wheat berry of most of its nutrition so that all you’re left with is the starchy layer that gives bread that deliciously addicting flavor.

Is naan better for you than bread?

Naan is about the same as bread nutrition-wise. The use of whole wheat flour and coconut yogurt makes this bread so healthy.

What is the difference between naan bread and roti

Roti is an unleavened flatbread made of whole wheat flour. It is light and has no filling, and is served as a scoop for veggies and dips. On the other hand, naan is a leavened flatbread that is more bubbly and heavier than roti.

I first made this recipe without yeast. Just follow the recipe omitting the addition of yeast. The only difference you might see is the bread is flatter and has fewer bubbles. Be careful not to overwork the bread. This will make it flatter when cooking. Technically this will not be naan but roti.

This recipe is vegan, for the dairy, plain coconut milk yogurt is substituted for cow's milk yogurt.

What to serve with naan

Typically, this whole wheat naan recipe is served hot and brushed with butter. It can be used to scoop other foods, such as my Roasted Red Pepper Spread recipe. It would also go great alongside Curried Coconut Chicken.

This whole wheat naan is the perfect dipping bread for hummus. Try one of these unique recipes at your next party.

The easiest way to knead naan is with a KitchenAid standing mixer using the dough hook. Knead the dough for 8 mins in the stand mixer. Then add the oil and knead again for 4 more mins.

How to roll out the dough

Use kitchen scales to weigh and divide into even-sized balls, about .75 ounces each. Roll out and gently pull each ball into 7 inches rounds.

Make sure that the dough has even thickness and is not rolled out too thin. It needs to be about 1/4 inch thick. Otherwise, it won’t puff and be soft.

Why is my naan dough sticky?

When working with the dough and find it sticky, lightly dust both the dough and your hands with flour. Work in the flour quickly, being careful not to overwork the dough. It will become stiff.

First, get your cast iron skillet hot on medium-high heat before placing the first naan in. When you are ready to cook the naan, turn down the heat to medium and add the first naan. Make sure you dust off any excess flour before you do so.

The bread will almost instantly start to bubble and start to puff up. When this happens, turn the bread over and cook the other side. You may have to adjust the heat from time to time to prevent burning.

Stack the naan on top of each other as they are finished cooking. Keep them wrapped in a kitchen towel, so they stay warm.

What is a tandoor oven?

A tandoor oven is basically a clay oven fired by charcoal or wood and can reach temperatures as high as 480°C. When used to make naan bread, the dough is slapped to the inside of the clay. The high heat inside the oven makes the dough puff, expand, and giving it a distinctive blistered look.

Why use a cast iron skillet?

Naan is known for its golden brown toasted bubbles that are dotted over the bread. To achieve this, it was traditional to make it in a tandoor oven. A cast-iron skillet will be the best choice to properly cook the naan if you do not have a tandoor oven.

Try mixing in your dough some of these flavorful items.

Fresh: Wrap naan in aluminum foil and place in a 250 oven. Heat thoroughly for about 15 minutes.

Frozen: If your naan bread is frozen, then set it out to defrost on your counter for an hour or so. Then wrap it tightly in aluminum foil and place in a warm oven to heat.

Can I freeze homemade naan?

It's a great idea to keep some extra naan ready to serve in your freezer. First, allow the bread to cool completely, then wrap it tightly in plastic food wrap or parchment paper. Next, place into a freezer bag and seal tightly. Label and date it before freezing. It can be frozen for up to six months.

Love a recipe you've tried? 😋 Please give it a star ⭐⭐⭐⭐⭐ rating in the recipe card below and/or a review in the comments section further down the page. Stay in touch with me through social media @ Instagram, Pinterest, and Facebook. Don't forget to tag me when you try one of my recipes!

Need an ingredient to make this recipe? Click this Instacart button and get what you need sent right to you.

Need an item in the this recipe? Click the Instacart button and have it sent right to you.

Hungry For More?Join my members email list to get the latest recipes and party ideas. You will also have access to my members only printables library.

Welcome to Intentional Hospitality, a food blog dedicated to delicious and easy recipes that inspire fun, fellowship, and belonging around your dinner table. Read More…